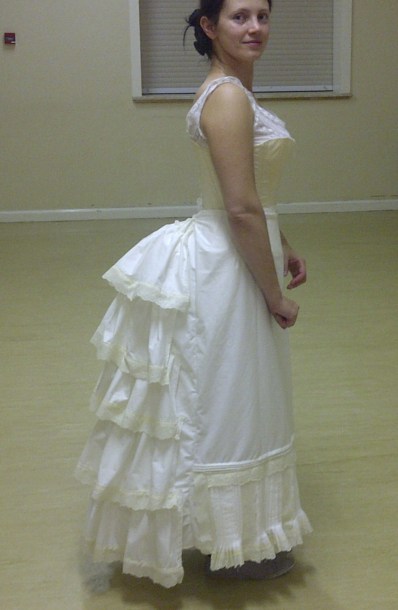 In this article we willcover the construction of a typical late Victorian petticoat with back flounces. We will also discuss the steampunk version of the traditional petticoat – and how to get 3 styles out of one skirt in seconds!

The flounced petticoat by Prior Attire

4m of cotton twill; for steampunk version any non stretch fabric can be used, here 5m of embroidered silk

Buttons; for the steampunk version, 05m of elastic

Also, for the steampunk version you will need 5m of ribbon or a string; here Russia braid was used

Different styles were possible, you can gather the flounce loosely, box pleat it or use a combination of the methods.  Here I wanted to replicate the one in Harper’s Bazaar, and used the combination of trimming and pin tucks.

Divide the flounce into equal parts and work out how deep your pin tucks have to be to pleat to the desired width.

Deciding on the size and amount of the pin tucks

Hem the edges and sew on the trim, and then work on the pin tucks. You can use a pin tuck foot for that – though I realised that the tucks on mine will be far too shallow to my liking, so I simply stitched it with a normal foot.

Press – if you have spray-on starch, use it. Sew the flounce to the bottom of the front petticoat piece.

Flounce pressed, ready to be sewn on

Hemming the flounces of the steampunk petticoat Sew, fold over and press.

If you want, you can add a row or two of pin tucks running horizontally – particularly effective on either front flounces or back bottom ones – or for the sleek Natural Form petticoats! Pinning the flounce, dividing it into smaller and smaller parts

Sew it on, gathering the extra fabric. You should now have two separate pieces, the flounced back and the front with one flounce. Joining them will hugely depend on how you want your petticoat to close – you can join the pieces on both sides, leaving only small opening at the side, and button it there. Or, you can leave one seam open completely at the side and use buttons all the way through.

I chose the latter, since I knew that then I would be able to open the petticoat at the bottom, if I need more space for riding or dancing, and it would also allow for faster changes if needs be.

The waistband and the darts in the front part Pleats and waistband at the back If you plan to wear your undergarments for more robust activities, like riding, dancing, tennis playing of skating, do try them on before you start making the garments going on top, as some alternations may be necessary.

I discovered that I needed to leave the two bottom buttons in the petticoat undone for dancing (to keep pace with my partner in the Viennese waltz I needed bigger steps!   The video of the dress rehearsal can be seen here:

As far as riding was concerned, I needed to leave the petticoat open (3 buttons here), but when worn on the bustle pad  it turned out to be rather comfortable – I was able to perform all kind of tricks on horseback.

and another flounced petti, this one wit 4 flounces…

Forming the channels – inside Outside view: small eyelets go all the way through all the layers of the fabric Inside view showing a second pair of eyelets – opening to the channel, stitched over one layer.

Your Steampunk petticoat is now ready! – a few examples below You can shorten the skirts on the sides by pulling the ties at the bottom and knotting them into a bow. Here only one side hitched a little bit:

And the skirt hitched upon both sides, for a sexy ’saloon girl‘ look

Happy sewing! and, if you are in a hurry, you can always buy one of ours – basic stock  petties  can be found in our shop!

The Collection of the Kyoto Costume Institute; Fashion, a History from the 18th to the 20th century,  Taschen, 2002

7 thoughts on “How to make a Victorian flounced Petticoat”